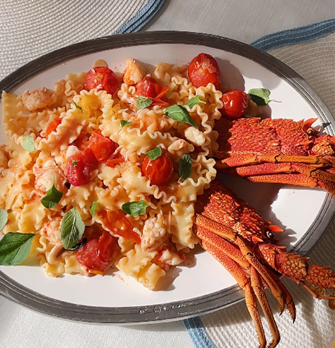 Separate lobster heads from tails. Remove meat and roast lobster heads at 200°C on a lined baking tray until bright red (around 20 mins), then set aside to garnish.

Bring a large pot of salty water to the boil for pasta.

Deglaze pan with white wine and reduce until ½ of liquid remains.

Add tomatoes and reduce the heat to medium low. Simmer until the tomatoes begin to break down (around 5 mins).

Add lobster meat and continue to simmer until cooked (around 2 mins).

Toss the pasta through the lobster sauce with herbs. Loosen the sauce with some pasta water. Taste and season. Serve alongside roasted lobster heads with a drizzle of extra virgin olive oil.