When the icy cold water of the Southern Ocean collides with the ancient  shoreline of the driest state of the driest continent in the world, something magical happens.

The Ferguson family have been involved in the fishing industry on the beautiful South Australian coastline since the 1960s when Andrew’s father, Robert Ferguson, gave up a life on the family farm for the adventure of a life fishing one of the greatest fishing grounds in the world. This is the home of the Southern Rock Lobster. Port Macdonnell, Robe, Beachport, Cape Jaffa and Kingston (SE), the towns of the South East as it was known – the Limestone Coast as it is now – are all known for the exceptional quality of their Southern Rock Lobster. Robert originally started fishing out of Cape Jaffa.

Andrew started his career on the deck of a fishing boat after leaving school in 1975. It was his destiny to become a fisherman.

They were halcyon days in the 1970s – when people would cook freshly caught lobsters on the beach on open fires in old drums of pure sea water. But the halcyon days would end. The stormy waters and tempests of troubles would come.

Risk and tragedy has always been associated with the sea but so has riches and reward. The potential reward resulted in the risk of overfishing the unique and bountiful coastline. As a result, stringent regulation and licensing was put in place to protect the precious species.

Andrew moved and started fishing in northern part of South Australia – off the coastline of Kangaroo Island and Port Lincoln.

By 2003, Andrew and his wife Debra had decided that the only way they could ensure that their Southern Rock Lobsters would arrive on the plates of their customers all over the world in perfect condition was for them to take over that responsibility themselves. This saw the start of their processing and exporting business.

Staying faithful to that commitment, other fishing families put their trust in the Fergusons … Fergusons had emerged leaders in the community and the Fergusons did not let them down.

In 2015, Ferguson Australia purchased 2 other seafood companies expanding its footprint to Five Star Seafoods in Port Macdonnell and Mori Seafood in Port Lincoln.

Today, the company operate deep sea ocean jacket fishing vessels and three export facilities in South Australia. They are passionate about supporting local fishermen, helping to protect the fish stocks for generations to come, and supplying sustainable Australian seafood, both locally and to the world.

Ferguson Australia is 100% owned by the Ferguson family. 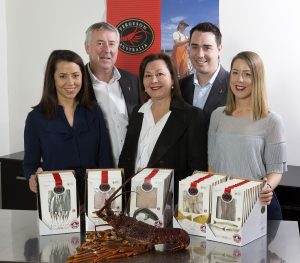