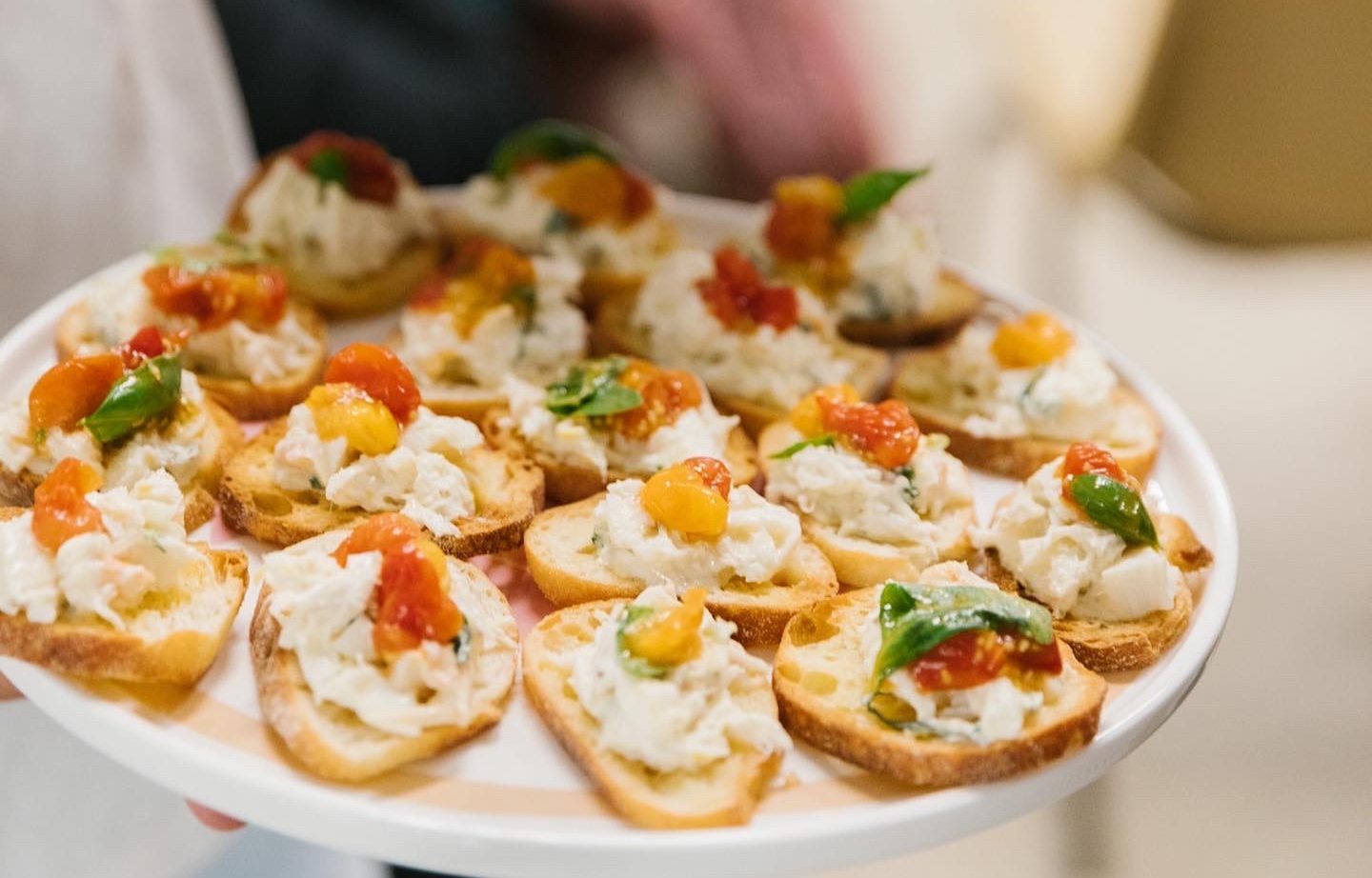 To prepare the crostini, melt butter in the microwave or in a small saucepan with the clove of garlic, set aside to infuse. Meanwhile slice baguettes very thinly (0.75cm). Place on a tray lined with baking paper. Brush the top side of each slice with melted butter.

Bake at 200 degrees for 10 minutes. Check often as the burn easily. Allow to cool completely before storing in an airtight container. Crostini can be made a week in advance.

Just after putting the crostini in the oven, quickly toss the mini cherry tomatoes in olive oil in a small baking tray, add a clove of garlic and put in oven for 10-15 minutes.

To prepare the lobster, hold the lobster head firmly in one hand and the tail in another and twist to separate.

Using sharp scissors cut along both sides of the underside of the tail to remove the membrane. Gently lift out the tail meat. Cut into medallions, then dice into 1cm cubes or smaller.

You can leave the lobster head whole to serve alongside the crostini – there is usually one or two guests who adore cracking the legs to get the meat out! Or you can remove all legs from the head of the lobster. Crush gently with a rolling pin or similarly heavy item, pick out the meat and add to the cubed tail meat.

Toss the lobster meat through the cream mixture and refrigerate until serving.

To serve you the lobster in the centre of a platter, in a bowl, as you would a pate, surrounded by crostini and extra wedges of lemon. Or it can be served assembled.

Top each crostini with a tablespoon of the lobster mixture, top with tomato salsa, grated cured egg yolk and a tiny sprinkle of crushed pink peppercorns.

The lobster mixture can be made the day before. It can also be served in brioche buns, ribbon sandwiches or radicchio lettuce cups.

Annabel Bower’s Notes – From my whole lobster when testing this recipe, I extracted 380gm of tail meat and a further 180gm of meat from the head and claws – so it really is worth breaking the whole lobster down. This combined quantity used up the dressing perfectly (425ml). If you do leave the head intact you will probably only use 2/3 of the dressing. Served the rest in a dipping bowl alongside the lobster head.

Never throw away the shell once you’ve extracted the meat. Check it in a huge pot with onion, celery or fennel tops, black peppercorns, and garlic and make a delicious shellfish stock. Perfect for risotto, seafood stew, or if strained then reduced to 1/10 of the original volume – perfect for pasta dishes. Alternatively – pop the shells in the freezer and turn into stock another day.

The cured egg yolks were to use up the left-over yolks after only using whites for meringues. For 6-7 yolks I combined 1 cup of table salt with 1 cup of castor sugar. Poured half into a glass container, making little indents in the salt/sugar with a spoon, gently placed an egg yolk in each indent, gently sprinkled over the remaining salt/sugar.

Seal with a lid, pop in the fridge for 5-7 days. To finish off I gently remove from dish and brush off the salt/sugar. Rinse carefully in cold water. Place on a tray, lined with baking paper and very lightly oiled and bake at 80 degrees for 45 minutes.

Once made they can be stored in the fridge for 1 month and used on salads, canapes, pastas, risottos and all sorts of dishes.