Flathead is wild caught and notably recognised for its usual flat head and body found in South Australian waters. The Australian Deepsea Flathead is widely considered to be the best Australian fish for fish’n’chips, due to the sweet flesh which is moist, flaky and tender especially when encased in a crisp batter. It can also be steamed, poached, pan-fried or grilled.

Southern Garfish (Hyporhamphus melanochir) are a schooling fish found in sheltered bays, inshore coastal areas, estuaries and especially where seagrass meadows are established.  They are found near the surface at night and on the bottom to midwater during the day.

King George Whiting (Sillaginodes punctatus) are prized for their sweet, delicate flavour. King George whiting is line-caught in coastal waters off Kangaroo Island and the west coast of South Australia.

Bight Redfish (Centroberyx gerrardi) is wild caught in the pristine waters of the Southern Ocean. These schooling fish are found in the deep cold waters around reefs and near the bottom of the ocean floor. The cold oceanic habitat gives the Bight Redfish a clean fresh flavour, and being small in size gives it a sweet flavour compared to larger fish. The Bight Redfish has a high fat content making it highly sought after by chefs. 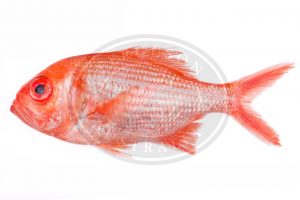 The Ocean Jacket (Nelusetta ayraudi) is also known as Leatherjacket and Chinaman Leatherjacket. This beautiful fish ranges in colour from bright yellow to pale white and grey. The flesh is white with a moist and delicate texture and pleasant sea aroma. Ocean Jacket is caught in the Southern Ocean around seagrass or the sand bottom using trap fishing vessels. 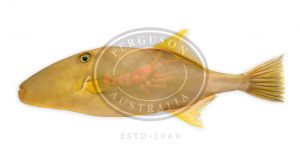 The Yellowtail Kingfish (Seriola lalandi) is regarded as one of the finest sashimi fish species. The farmed Yellowtail Kingfish is genuinely superior to the wild, with a higher fat content, cleaner flavour and firmer texture making it more versatile, consistent and delicious. Produced from wild brood stock, hatchery raised fingerlings are grown in an open water culture environment located in the Spencer Gulf, South Australia. The fish feed is also locally produced, and natural from sustainable sources. It is also GMO and land animal product free. Yellowtail Kingfish has naturally high levels of Omega-3 and vitamin E, also making it a healthy eating option. 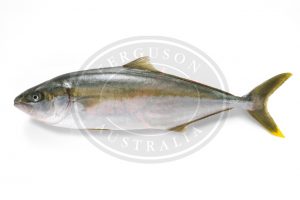